A downloadable game for Windows

Ocean OI is an experimental series of combat encounters in RPG Maker 2000's native turn-based battle system, exploring MP management as a central feature of strategy and party dynamics. Here are some of the things I'm trying:

- 13 challenging battles with minimal framing narrative. Ocean OI takes a brief tour through its mechanics and wraps up before exhausting their possibilities. The gauntlet has been carefully curated for depth, rhythm, and drama.

- Well defined, interdependent character roles. The "Conduit" class nourishes the party with MP (called numen), but every party member has their own job to do managing supply and demand in the numen economy. Who's got it? Who needs it? Who must go without?

- Simple enemies, elaborate encounters. Each monster has a role to play in its own party, they've been arranged to support each other and to press you in diverse and interesting ways. An enemy you write off in one battle might become the most urgent threat when it gets the right support.

- All the charm of being lost at sea in the moonlight. Despite my minimalist intentions, I got distracted tinkering with polish. Enjoy the mood lighting! If the low contrast is too low, please leave a comment and I'll take another stab at it.

Just finished and... Bravo! You seem to know exactly what you are after, and nail it with aplomb. There seem to be a special subset of rpg maker hackers that really go all in for mechanics/encounter design and make great short games - always glad to find another voice in the space. I'll try your other OI entries too. Thanks for making something fun!

Hmm, I went and read some of your articles, and 'the bad fight' piqued my interest. There is another designer who does short experiments that I think you might find some inspiration in - another way to vary the fixed encounters is to have them arranged nonlinearly with the rewards being expanded character build/mechanical options rather than just power scaling. "Wine and Roses" does this and I think is enjoyable. Sort of a turn based boss-gauntlet 'Metroidvania'. This author, Craze, has also played around with large, swappable parties and attrition in ways that might be inspiring to you, based on your writing.

excellent! craze was a big inspiration to me once upon a time, and wine and roses has been on my backlog forever.. time to bump it up! if you know anything else in this space you think i'd find interest please pass it along. thanks for your thoughts, and sorry for the delayed response

Perhaps even better - Obelisk: Devilkiller, also by Craze? It has the same kind of non-linear 'metroidvania' style of gameplay, but also has a 'Burst' system that reminds me in some ways of some of your systems. It also has a larger roster of characters you can exchange with swappable equipment so there is some strategy of preparing for specific battles.

Have you tried Visions and Voices (also Craze)? I don't think the mechanical systems can touch my other recommendations, but it is interesting for pitting the player against attrition and a sort of time limit, with lots of optional exploration that furthers the characters/story. There is a tension between taking risks and playing it safe that I liked, reminding me of a good roguelike.

And for a generally different take, but another short experience with what were really memorable and fun battle mechanics for me, In Search of Immortality by Indra and Fomar. There are levels, but they only increase the 'slots' you have to modify your characters.

These might help inspire you if you seek to take some of the "tightness" out of your games ('overdesigned fixed combats' I think you said), either by trying out less linearity in the fixed combats (Obelisk and Wine and Roses) and possible loadouts, or maybe by playing around with more meaningful random encounters (V&V or Immortality)... I hope you also realize that the mechanical 'puzzly' tightness you have been offering has its place, and you are doing it *really* well.

For example, I would say "Slimes" has a similar focus on a gauntlet of battles with a (slowly expanding but basic) toolset. And I enjoyed it, but I was eventually feeling "solved" with that game's strategy, while Ocean OI had me laser focused in every battle. Perhaps not for everyone, but a niche that exists and you are equipped to fill well!

Okay, last one for now: Grist of Flies by Razelle. Nice short game with fun mechanics. Interesting ideas - 'characters' are squads with eq slots that represent jobs the individual characters can do. So team members are swappable to different squads, and have different efficacy ratings in the different positions (although the demo never has any reason to put anyone in a position that's not their *best* one as far as I could tell. Action economy that includes moves for building up MP.  Buffs and debuffs are really important - ditto status effect, both always work on everything. This is one of my favorites and only forgot it because it's been a while.

oh man, i feel like i was just looking at this one, too, but i can't remember how i got there... thanks for this one, too!

visions and voices is the one craze game i have played, back when it was relatively new, although it didn't click with me then. looks like i've got a long overdue crazegame deep dive ahead of me. thanks for all the recs! (i'm a big slimes fan, too)

i'll take what you've said to heart, too, about puzzly tightness. i do appreciate it from time to time - what i think i'm really not interested in is trial and error solutions with a slim margin of error, and for me at least ocean OI dips into perilous guesswork more often than i'd like. i'm a little less interested in explicit reasoning than i am in building up intuition and managing risks, which feels really expressive to me in a way that i like. this is kinda what i arrived at after revisiting the 7th saga after atom OI and playing a bunch of nes DQ last year, both of which involve a lot of unpredictability and variation. cataphract moves a step toward embracing randomness (in kind of a 7th saga way, where things can always go south at the drop of a hat), but i'm hoping to more fully explore a sort of 'soft puzzle-solving' approach in a future title. (it occurs to me now that the piece where i try to dig into this a bit more isn't publicly visible right now, but if you're up for a long, messy read, check out this piece)

I really enjoyed this!  Managing a steadily decreasing stock of items worked well with the theme of an ocean journey, and I loved the mysteriousness of whatever was going on with the final boss.  Oi!

edit: how can i send you an email or something? reading thru your blog now

hi there! sorry for the late response, i'm glad you liked the game though! if you wanna email me i'm ***********@gmail.com (i'm also on twitter.com/fulgadrum)

Hello, sraeka-lillian, have any interest in getting this game translated into Spanish? If so, please, let me know.

Had a blast playing this!

hey, sorry for the late reply! i wouldn't mind talking about it a bit. do you have a portfolio or anything i can check out in the meantime?

This was legit one of the most viscerally satisfying experiences I've had with a game in a while. Can't remember the last time when the last battle in a game was both that intense and heart-pounding. Had to catch my breath after I finished this. Great stuff!

Very enjoyable game! These fights are no joke. After the first few battles I started to get into a rhythm of how to distribute my NU among the party members better and the game clicked a lot more for me then. Certainly the most I've thought about my turn in an RPG in a long time, since there's always something at stake for making the wrong decision.

Reply
Far Away Times2 years ago(+2)

This game is a blast, if you're at all a fan of tense turn-based combat and experimental rpgmaker experiences please give it a play! It strikes this excellent balance where I've never played anything quite like it and yet it still feels genuinely epic and super-well-crafted. 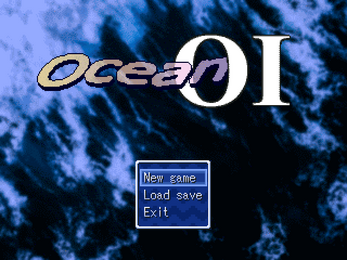 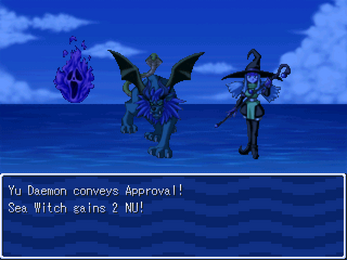 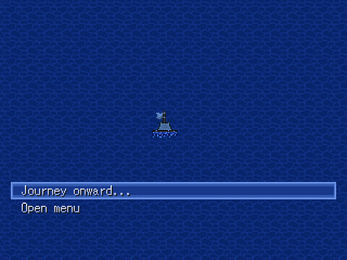 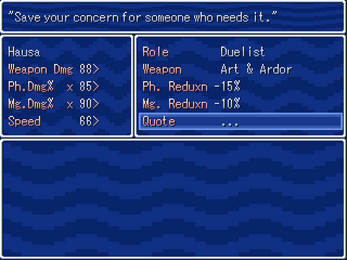 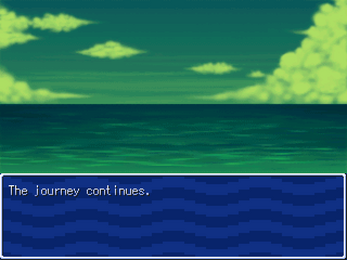